Santa Carla is the quintessential beach town, located in California. It was here that Hawaiian royalty first introduced surfing to the mainland — and locals and visitors alike have been riding the waves ever since.

Not far from the surf break, calliope music and laughter fills the air at the Santa Carla Beach Boardwalk, the West Coast's oldest surviving seaside amusement park. A few blocks from the beach is Santa Carla's newly renovated downtown. The pedestrian-friendly, tree-lined streets are filled with vibrant shops and galleries, outdoor bistros and sidewalk musicians — all in keeping with Santa Carla's offbeat personality.

Santa Carla enjoys a Mediterranean climate characterized by cool, wet winters and warm, mostly dry summers. Fog and low overcast is a common feature during the night and morning hours, especially in the summer. People say it's also the Murder Capital of the World (hence the words on the back of the Welcome to Santa Carla sign).

The Santa Carla Beach Boardwalk is an oceanfront amusement park in Santa Cruz Ca. It is California's oldest surviving amusement park and one of two seaside parks on the West Coast of the United States (with the other being the Santa Monica Pier). The West Coast once hosted many more beach parks, including the Pike in Long Beach, California and Playland at San Francisco's Ocean Beach. Both have long since closed, but the Santa Carla Beach Boardwalk (actually Santa Cruz Beach Boardwalk, located in Santa Cruz CA) survives as a reminder of a bygone era in amusement. 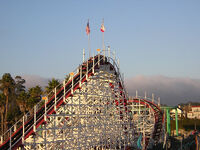 The Giant Dipper roller coaster, complete with its landmark red and white structure, spectacular view of the ocean at the first startling dip, and speedy successive dips and fan curves, keeps new and old generations coming back for more. The thrill ride, with speeds up to 55 MPH, proved to be all that and more. Before the Giant Dipper’s arrival, a visitor’s Boardwalk experience was limited to the L.A. Thompson Scenic Railway’s hills and valleys, tame by more modern standards.

More than 50 million riders have experienced the breathtaking excitement of the Giant Dipper, a classic wooden roller coaster, since it first opened in 1924.

Don't miss this ageless thriller located in the middle of the Boardwalk! 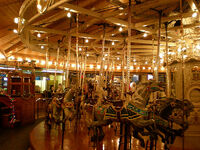 The Boardwalk’s classic carousel, built in 1911, takes visitors of all ages on a timeless journey of color, lights, and sound. The carousel features one of the few remaining brass ring machines in the country. Riders on the outside horses can still grab a ring (these days they’re made of steel) and try to throw it in the clown’s mouth!

Music for the carousel is provided by beautiful antique band organs. These mechanical wonders are a must see and hear!

There's always something cool happening at the Boardwalk, including two free concerts EVERY FRIDAY (6:30pm and 8:30pm) all through Summer on the Beach Bandstand.

The town of Santa Cruz was used as the town of Santa Carla for the original 1987 Lost Boys film. Fictional Santa Carla is based on Santa Cruz where much of the movie The Lost Boys was filmed (although the name, itself, is an anagram of Santa Clara). Santa Cruz is located on the north end of Monterey Bay, CA. The Lost Boys: The Tribe was set in the fictional town of Luna Bay, CA (filmed in Vancouver, BC). Lost Boys: The Thirst was set in also fictional San Cazador, CA (shot in South Africa). If Santa Carla is an alternate version Santa Cruz then in all likelihood Luna Bay is meant to be an alternate version of Monterey Bay, CA and San Cazador is probably based on one of the many small towns along the coast between Santa Cruz on the north end of Monterey Bay and Monterey (City) on the south end of the bay.

Some locations used in the film, such as the outside amphitheatre where Timmy Cappello played "I Still Believe", and Joe Ferrara's Atlantis Fantasyland Comics, were destroyed in the 1989 Loma Prieta earthquake.

Over the years Santa Cruz has been subject to controversy, mostly because of many instances of unexplained disappearances and known gang activity, earning it the nickname of "Murder Capital of the World". Despite this, Santa Cruz still remains largely popular among tourists today. Many life-long residents say the nickname is made up because of the 1987 film The Lost Boys.

Retrieved from "https://lostboys.fandom.com/wiki/Santa_Carla?oldid=5353"
Community content is available under CC-BY-SA unless otherwise noted.